This is our first time to celebrate Mardi Gras and it was SO MUCH FUN!!

It’s always fascinating to participate in other traditions but this one has already made it on top of my list.

I didn’t know anything about Mardi Gras prior to our trip to Universal Orlando so I did some research…  Mardi Gras (French for Fat Tuesday) originated in New Orleans.  It is the final day of feasting before Lent begins.

Although Mardi Gras is originally being celebrated in New Orleans, Universal Orlando did a fantastic job in recreating this event – parade, live bands, Cajun cuisine.

Rain or shine, the party still continued!  It rained heavily before the event but the staff reassured us that the parade will still push through.  In the pictures, you would see people wearing ponchos.  Luckily, the skies cleared up during the parade.

I love the parade’s vibrant colors, festive music, elaborate floats and costumes, and of course, the tradition of catching the beads!!

Millions of colorful beads were being thrown to us from the floats and all of us were trying to catch them!  Chaotic, yes, but fuuunn! 🙂

The lovely performers were interacting with the audience in between the floats.  People were dancing and swaying to the tune of the music while waiting for the next float to arrive.

Whenever we saw a float arriving, we immediately raised and waved our hands in the hopes of getting the attention of the throwers and catching the beads before anyone else does.

Despite being in front of the viewing area, I had a hard time catching the beads while they were in the air.   The guys behind me were taller and had longer arms.  So, I did the next best method, I picked up the beads that fell on the ground faster than them and the old lady beside me.  The lady exclaimed to her friend, “She’s faster than me!”  It was hilarious!  All of us were competitive!  Mr. C and I gave her one of our beads and the happiness in her face was priceless.

There was a time that I picked up quicker than the guy behind me.  Seeing that it was supposedly his (it landed almost right on his feet), only I bent quicker, I gave it to him.  Several minutes later, I noticed that a beaded necklace was being placed on me.  I turned He returned the favor!  It’s nice that people are having good fun despite the thrill of catching every bead possible.

As it was about to end, the rain showered us as if it is the last hurrah of the event.  It elevated the ecstatic feeling that we had.  It was like we were playing under the rain but in a festive way.  Mr. C and I were jumping and trying to catch the beads with both hands this time (no cameras) while the rain poured.

I can’t imagine a better finale!

Thank you Universal Orlando for this fun and memorable experience! 🙂

Planning to go to Disney World?  You can buy discount tickets from Florida Ticket Station.

Pin it for later! 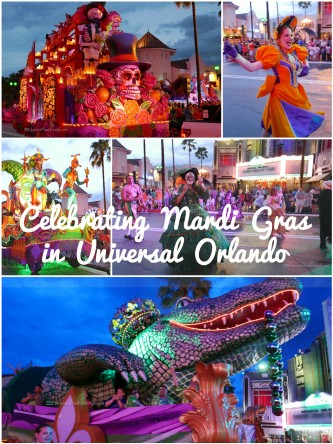